April 16, 2020 by Professional Recruiter Associates in For Our Users 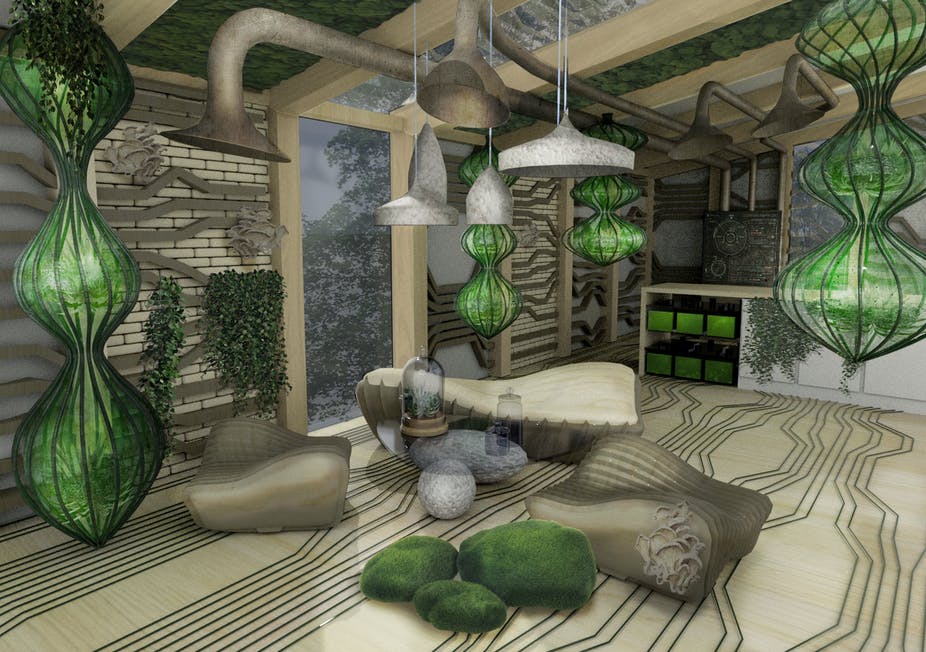 What if our homes were alive? I don’t mean smart homes with the disembodied voice of Alexa deciding the setting for your living room spotlights. I mean actually alive – growing, living, breathing and even reproducing. The idea might seem far-fetched, but in the face of a climate crisis, we humans need to think radically about the way we live in and build our environment.

Biology is capable of extraordinary feats of engineering, and the next frontier in building technology might be to make buildings part of nature. Myself and my colleagues at Newcastle and Northumbria universities have set up a new research centre to investigate this possibility. Here are five ways we think the buildings of the future might become living, breathing things.

From the crushed shells of limestone to the timber of dead trees, we already use nature’s materials for building. Yet this pallet of materials could be radically extended. For instance, Scientific American recently featured mycelium, the root network of fungus, as a material of the future. Mycelium can grow on little more than wood chips and coffee grounds in very short periods of time, creating materials with significant structural performance.

The Hy-Fi installation in New York, which consisted of a 13-metre tall tower, was constructed of mycelium bricks. The greatest challenge, however, might be to design a structure where the mycelium is kept partly alive and able to grow and adapt. The myco-architecture project, led by Lynn Rothschild at NASA, investigated this possibility, imagining habitats which might reproduce themselves – albeit for colonies on other planets.

Cracks in a building’s concrete usually spells the beginning of the end. Water will seep in and eventually rust the metal reinforcements that hold the structure stable. But researchers have begun to experiment with concrete that can heal itself. One promising method – currently being developed by a group led by Henk Jonkers at Delft University of Technology, among others – is to embed bacterial spores (like seeds for bacteria) in the concrete mix.

When water gets in through microscopic cracks, the bacteria are reanimated. The material literally becomes alive and triggers a chemical process causing new calcite crystals to grow and “heal” the concrete. Using this technique might add decades or more to the life of a concrete building.

Many buildings – especially the high rise, glassy office towers found in major cities across the world – are on permanent life support. Mechanical lung-like air conditioning systems circulate air to heat and cool rooms. Of course, it’s always an option to open a window to allow natural ventilation to occur. But what if the walls themselves could breathe?

Hironshi Ishii’s group at MIT have developed materials that can change their shape in response to water. These materials consist of layers of bacteria spores (similar to those used in self-healing concrete) and latex. When the material dries, it contracts and changes shape.

Using this method, they have demonstrated clothing that can respond to human perspiration. My group have been taking the first steps to investigate extending this method to create whole building membranes which might “sweat” as indoor humidity rises. Using latex membranes coated with bacteria spores the material will flex and open pores – like sweat glands – allowing air to flow through the walls, for example, when steam builds from a shower or a kettle.

We are surrounded by trillions of microorganisms on every surface of our homes our bodies and in the air around us. While we spend millions of pounds per year on antimicrobial cleaners to kill much of this complex ecosystem, it has been known for some time that those who live near farms may suffer less from allergies than those in urban environments. It seems that being exposed to “good” bacteria helps to build the immune system in children.

In an interesting pilot project, researchers at University College London have begun to investigate how surfaces in, for example, kitchens can be made bio-receptive – actually promoting the growth of bacterial which are known to offer resistance against disease causing bugs. Soon, we might be able to eat our probiotic yogurts in probiotic kitchens.

Most buildings are constantly absorbing materials and energy, while returning waste that needs to be taken away and treated at industrial scales. But new research suggests that this waste could actually become a source of energy for a building. A team of researchers on an EU project called Living Architecture is working to develop a new type of microbial fuel cell, which takes domestic waste and generates small amounts of power, as part of a wider project exploring the processing power of microbes in buildings.

The fuel cells are integrated into bricks that would become part of the structural fabric of the building as well as being its stomach. The bricks take in waste water and bacteria convert chemical energy, as the waste is broken down, into electrical energy. In this scenario, your toilet could charge your mobile phone.

Exciting as this sounds, there is a downside to living buildings: that is, they will inevitably die. But buildings already have a life cycle. Aside from the occasional geriatric tourist attraction, most of our buildings are in a constant state of change. When they do reach the end of their useful life, taking buildings down is costly and polluting. Imagine a city of buildings that gently die and return to the Earth forming the food for the next ones to grow to change and adapt. Surely that is more exciting than a smart home with a fridge that will automatically reorder your broccoli.