August 18, 2021 by Professional Recruiter Associates in For Our Users 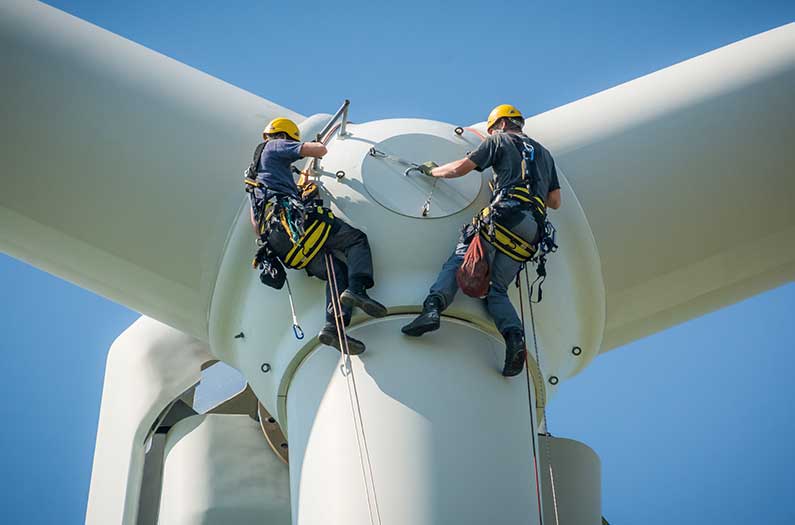 About 18 million people currently work in the energy industry worldwide, a number that with robust climate action could increase to 26 million by 2050, according to new calculations.

The findings cut against the argument, often advanced by fossil fuel interests and the politicians who support them, that de-carbonization is a jobs killer.

Sure, it’s true that weaning the energy system off fossil fuels will result in fewer fossil fuel jobs. But in most regions of the world, new renewable energy jobs will more than make up for these losses, researchers report in the journal One Earth.

“The de-carbonization of the economy will likely led to an increase in employment in the energy sector, with the manufacturing and installation of renewable energy sources potentially becoming about one third of the total jobs,” says study team member Johannes Emmerling, an environmental economist at the European Institute on Economics and the Environment in Italy.

Their data cover 50 countries worldwide, including important fossil-fuel-producing areas that haven’t been well represented in past studies such as China, India, Canada, Russia, South Africa, Australia, Brazil, and the Middle East.

For each job type in each country, they calculated the “job footprint,” meaning the number of jobs per unit of electricity or fuel produced. This can vary a lot from country to country: it takes 725 workers to dig a million tonnes of coal in India, but just 73 in the United States, for example.

They then used a computer model to predict the number of energy jobs in different regions under various future scenarios.

Climate action to reach the Paris Agreement of keeping global warming well below 2 °C could lead to a net increase of 8 million energy jobs worldwide, the researchers found.

About 80% of current fossil fuel jobs are in fossil fuel extraction, and such jobs will decline especially rapidly with de-carbonization. “This is an important finding as it indicates that extraction sectors are where governments need to focus their efforts in order to create just-transition policies,” the researchers write.

The number of new renewables jobs is larger than the number of lost fossil-fuel jobs in most parts of the world. But a net loss of energy system jobs from de-carbonization could occur in China and some fossil-fuel-exporting countries such as Mexico, Australia, Canada, South Africa, Nigeria, and Angola.

The good news for these countries is that over one-third, or 7.7 million, of the new renewable energy jobs are in manufacturing and installation of solar and wind infrastructure. Such jobs aren’t tied to a specific location the way that, say, working a coal seam is. So countries could compete for what the researchers call a ‘global pool’ of renewables manufacturing jobs.

“Regionally there will be important disruptions in labour demand and important considerations for social and labour market policies to ensure a just transition, but at least macroeconomically, the implications can be positive and paying for these compensations and transition in key fossil extraction zones and countries is a worthwhile price to be paid,” Emmerling says.