August 16, 2021 by Professional Recruiter Associates in For Our Users 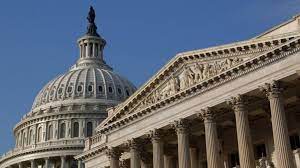 WASHINGTON (AP) — Senate Republicans have reached a deal with Democrats over major outstanding issues in a $1 trillion infrastructure bill and said they are ready to vote to take up the bill.

A test vote is possible Wednesday evening. It would require 60 votes in the 50-50 Senate to proceed to consideration of the legislation. A potentially days-long process would then be launched to consider the bill and add any possible amendments.

Sen. Rob Portman, the lead GOP negotiator in the infrastructure talks, announced the agreement at the Capitol alongside other Republicans.

The infrastructure bill is a key part of President Joe Biden’s agenda.

The outcome will set the stage for the next debate over Biden’s much more ambitious $3.5 trillion spending package, which includes child care, tax breaks, and health care.

The Republican senators met Wednesday morning with Senate Republican Leader Mitch McConnell, who appears to have given his nod to proceed to consider the emerging legislation.

The announcement of the deal comes a day after a lead Democratic negotiator, Sen. Kyrsten Sinema, met with Biden at the White House. Press Secretary Jen Psaki said the two were aligned on the infrastructure legislation.

“They are very much aligned on the path forward, both feel optimistic about the path forward,” said Psaki. “And clearly, both understand having lived through many iterations of legislating and negotiating before that it is always at the tail end, when you have, you know, some of the trickiest discussions. So, but they again remain quite positive about the form of forward momentum and the path we see the infrastructure package on at this point in time.”

Biden issued a statement on the bipartisan infrastructure deal Wednesday afternoon, saying it shows the nation’s democracy can function, deliver and do big things.

“I am pleased to join a bipartisan group of United States Senators and announce our deal to make the most significant long-term investment in our infrastructure and competitiveness in nearly a century,” Biden wrote.

Biden touted the fact that the bill will make key investments across the country and provide job opportunities for many Americans.

“It will put Americans to work in good-paying, union jobs repairing our roads and bridges. It will put plumbers and pipefitters to work replacing all of the nation’s lead water pipes so every child and every American can turn on the faucet at home or school and drink clean water—including in low-income communities and communities of color that have been disproportionately affected by dangerous lead pipes,” Biden wrote.

Biden also highlighted the fact that the legislation won’t raise taxes for people making less than $400,000 a year, there is no gas tax increase, and there’s no fee on electric vehicles.