Your next job interview could take place in virtual reality

November 21, 2022 by Professional Recruiter Associates in For Our Users 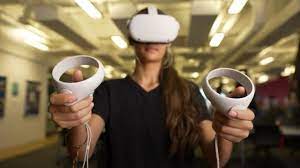 Going for a job interview is the stuff of nightmares for many people, while for others it is a chance to shine.

Either way you are typically still interviewed by other human beings, either after walking into a scary office with one or more bosses sitting behind a desk, or via an equally nerve-wracking Zoom call.

Yet thanks to advances in artificial intelligence (AI) and virtual reality (VR) technology, you may soon be interviewed for that job you really want… by a computer.

Earlier this year students at Sandwell College in West Bromwich put on VR headsets to do some mock interviews.

Their avatars – cartoon-like, 3D representations of themselves – were put through their paces by another talking avatar representing the AI software system.

“I’d never had an interview before in my life,” says engineering student Ayyan Ahmed. “But because there was no human judging me, and it was all online, I could actually express myself.

“And then, at the end of the process, he [the VR interviewer] told me what I did wrong, and what I did right. It really helped me to know what to do in my next interview.”

The VR system the students were using is made by London-based company Bodyswaps.

Questions and requests that the interviewees get asked range from the straightforward “tell me about your greatest achievements”, to the more challenging “do you prefer to be loved or feared?”

The user then gets feedback, not just on what they said, but how they say it, whether they are maintaining eye contact with the interviewer avatar, and even their posture.

Bodyswaps’ chief executive Christophe Mallet says the idea is that people can keep practising with the simulated job interviews until they feel ready for a real-life one.

He believes that the technology has the chance to level the playing field for candidates from less well-off backgrounds who might not otherwise have the opportunity to practise for job interviews in a professional setting.

“Things like communication, empathy and leadership are the secrets to success [in interviews], but how can you practise those? If you are rich, you can get a coach. Otherwise you have e-learning [such as watching videos on the topic], but that doesn’t work as you are lacking immersion.

“Using VR and AI we now have a way to immerse you safely in a simulation where you can practise interview conversations.”

Bodyswaps launched its interview simulations last year, and says it is mainly targeting schools, colleges and universities, so their students can practise before they enter the jobs market. Its business model is subscription based, with the amount an institution has to pay each year being dependent on how many people use the system.

While Bodyswaps is currently focused on mock job interrogations, the AI technology of Swedish firm Tengai is already allowing firms out in the real world to get a computer to do their initial job interviews.

The AI software is represented as a talking cartoon head that appears on the screen of a candidate’s computer or smartphone. It asks a set list of questions, and then the recorded answers are used to help recruiters draw up shortlists for jobs.

Tengai’s chief executive Elin Öberg Mårtenzon says that a central aim of the software is to avoid making wrong assumptions, such as judging someone on their appearance.

“We wanted to create a situation where you could actually look at objective data instead, by putting some sort of filter between the candidate and the recruiter,” she says.

“And that filter is supposed to mitigate bias in the process… so that they know that they are not being judged by things other than those relating to the job description.”

But while it might be tempting to see AI and VR technology as the magical solution for selecting the right candidate for a job, employment lawyer Susan Thompson says we need to be cautious.

“AI doesn’t eliminate risk, and it’s not without risk itself,” says the partner at London law firm Simkins. “So I think that’s the most important thing employers need to be mindful of.

“We have to remember, AI is actually still fundamentally created by a human. [So], first and foremost, I’d be saying to any employer who’s thinking of using it, be it at the interview stage, or even at the exit stage, ‘do you understand it, and to what extent have you spoken to the developer about what data points it uses?’

“And, has it been stress tested to eliminate bias? Does it eliminate gender bias? And how does it do that?”

Ms Thompson adds: “I would be hesitant in advocating that AI is used exclusively in the interview process. I think there should be some sort of human intervention somewhere.”